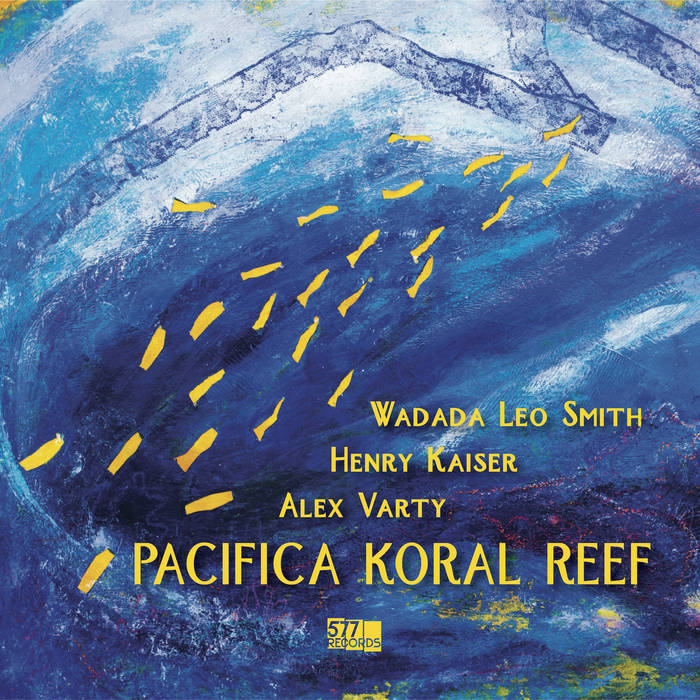 A Man Lost In Time

"I’m supposed to be writing about Pacifica Koral Reef, this record that I’ve made with my friend Henry Kaiser and his friend Wadada Leo Smith. And while the music it contains is, for me, a miraculous late-career achievement after 50 years of mostly playing in alternative rock bands, writing about it is a downright odd thing to have to do. In my parallel life as an arts journalist, I’ve interviewed everyone from Ornette Coleman to John Cage to Robert Plant but I’ve rarely had to write about myself, and I much prefer it that way. Fighting against my natural tendency towards self-effacement is the fact that Pacifica Koral Reef is more than just a record. Yes, everybody says this about their latest slab of black plastic or their shiny new optical disc, but this time it’s true.

Everybody says this, too, but wait.

The multidimensional experience that is Pacifica Koral Reef began life in trumpet player and composer Smith’s prodigious imagination, and then found a home on a single sheet of paper, inscribed with sinuous lines, bright blocks of spring green and earthy ochre, radiant pools of blue, circuit-board computations, and ancient glyphs.

You could call it a painting. The University of Chicago’s Renaissance Society, which hosted an exhibition of Smith’s graphic scores in 2015, probably would.

It’s also a portal, as Kaiser and I found when we began, with Smith’s inspiration and help, to translate it into sound. Over the course of several recording sessions, made next door to a sumptuous collection of vintage ukuleles and utilizing an array of microphones made of purest Soviet unobtanium, we were transported to locales as dramatically different as a steamy Chicago nightclub, a Third Stream concert hall, the crystalline world under the Antarctic ice, and a lonely Scottish moor (with hints of a lost tanpura droning in the distance).

Tracking the Pacifica Koral Reef score took us out of familiar habits and into new terrain. It sparked music that will never be duplicated, because if we tried we’d of necessity be expressing a different moment, a different feeling. And it strengthened preexisting bonds of friendship and respect. I met Kaiser in 1978, after seeing a poster advertising a concert of “weird guitar music”, and Smith perhaps a year after that, when he led a workshop for improvisers in Vancouver. Meanwhile, Henry has collaborated with Leo on a number of projects, most notably three 2-CD sets and two single album releases with their Yo Miles! band. Henry, who has known Leo since 1976, tells me that he thinks of Wadada as the favorite and wise uncle that he never had in his own family.

All of these visions, connections, and relationships are realized through the score. The music is improvised and ephemeral; the effect is intentional, replicable, and lasting.

That’s the beauty of Smith’s Ankhrasmation system, which combination of visual stimulation, musical notation, and social philosophy that prompts intuition, imagination, and cooperation.

“Ankhrasmation is a musical language, as opposed to a musical notation system,” Leo told music journalist Frank J. Oteri in 2011. “The first part, Ankh, comes from the Egyptian cross. Ras comes from the Ethiopian ‘head’, meaning the leader. And Ma comes from ‘mother’….It could be referenced scientifically, according to nature or biology, or it can be referenced according to fantasy, imagination. The only requirement is that the artists that are performing it maintain a high level of sincerity. That’s all it requires.”

I might argue that Ankhrasmation scores also ask their interpreters to be conscious of the values of “colour, velocity, [and] rhythm”. And when, more recently, I asked Leo if he envisioned Ankhrasmation as a way of integrating the eyes, the ears, and the hands of an improviser, or a group of improvisers, he agreed—but gently reminded me that I’d left out another important dimension: “the heart”.

I can’t speak to the heart that Henry brought to this project, although it’s plainly audible here, and he deserves full production credit for guiding Pacifica Koral Reef from improbable notion to elegant product. I won’t say much about my own heart, beyond noting that when we entered the studio I’d just had it broken, and you can probably hear this in the bagpipe-raga lament that I play on open-tuned acoustic guitar to kick off the record. But Wadada likes to speak about how his heart, his system, and his music are all connected to the need to not only survive, but thrive under injustice.

Obviously he’s talking about the African American experience in the United States—and more. With “African-American culture, the First People in North and Central and South America, the Jewish culture coming out of Asia,” he says, “all these things set in motion to wipe us out, they created something inside of us, all of us, that would not allow that to happen….So inside of that collective consciousness is this will to survive and to prosper. That’s the word I like to use. And when we look at African Americans, having people in business and in politics and in writing and literature and all these other dynamics of artistic and cultural activity achieve the highest level is just magnificent.”

Having been a diver much longer than he has been a musician, Henry is especially aware of the destructive effect of climate change on the coral reef systems that are an essential part of Gaea, the living earth. His many deployments to Antarctica as a working scientific diver for the past 20 years have made him an expert witness to the heartbreaking changes that are happening and accelerating right now. His guitar here reaches with from under-the-polar-ice inspired rhythms and narratives to intertwine with our collective concern for the earth and its elaborately interconnected web of inhabitants.

Snorkelling in the Pacific Northwest’s Salish Sea is a daily part of my own summertime routine. Like participating in collective improvisation, it gives me a sense of being part of a larger whole and an awareness that strange beauties await us just below every surface—along with the presence of risk, and evidence of life’s fragility.

Wadada brings the magnificent courage of his ancestors to this music. Henry is darting and provocative and deep into the practice of listening. Me, I’m just glad to be a part of the team, and I hope Pacifica Koral Reef brings light, warmth, and otherworldly pleasure to all those who hear it.”

577 Records is an independent record label
based in Brooklyn, New York
operating since 2001